Feel free to open a PR with your translation.

Thank you very much. Did. Unfortunately, the entire menu has not become in Russian, but now it is no worse than in the emuelec 4.3 version. Is there any way to translate the missing menu items yourself so that the translation becomes complete?

I feel uncomfortable while I updated the Chinese translation and get refused update,so I make my individual CHN translate project. 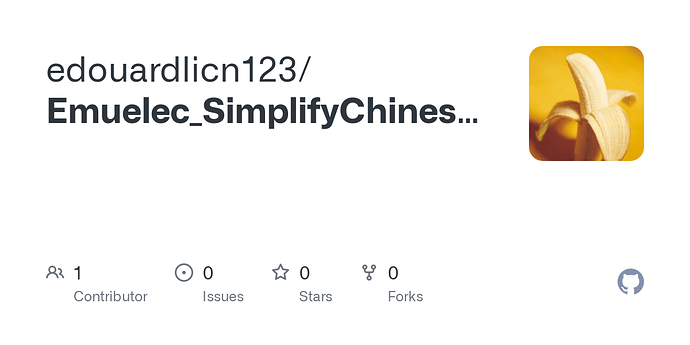 Contribute to edouardlicn123/Emuelec_SimplifyChinese_translation development by creating an account on GitHub.

Added most of those translation and fix some bugs.

It even says there that you should reopen the PR with JUST the translation changes. Your original PR had 749 files changed…

@edouard Contribution is always welcomed but we do need cleaner PR.

A quick peek into that PR and I wonder did you accidentally open the whole ES project under Windows using some text editor that replace all new line characters? Even so you should not do something like git add ..
When a lot of the things changed yet only portion of the changes should make it to the branch, only git add the corresponding part.

If that PR was merged then we will put ourselves into a conflict nightmare because then basically every pulling from upstream ES will certainly conflict with all our files, just for those shiny Windows new lines…

xiexie for your work ！—— from china

That is What you see.But things hide before you start to contri the EE.